This is the photo that I entered: 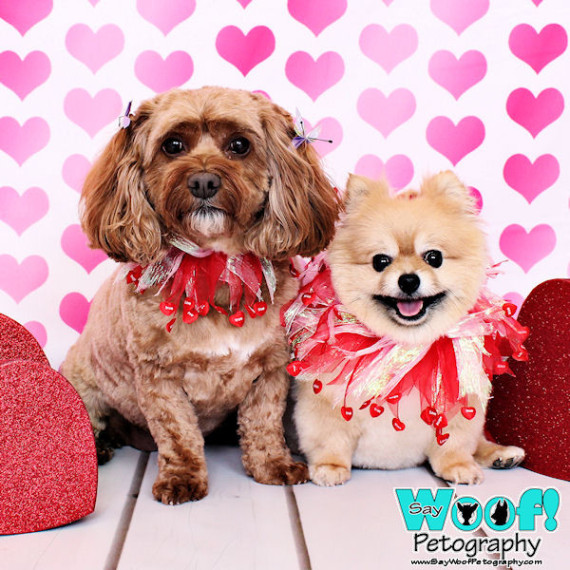 And here I am with the prize package that they sent me: 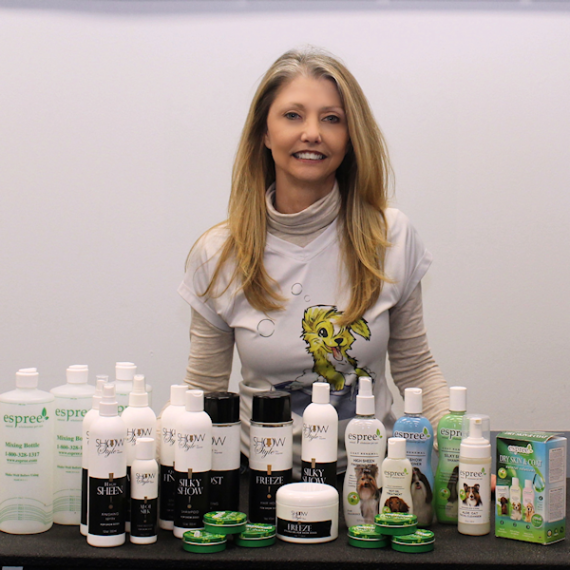 I can't wait to try out all these wonderful products.

It's OFFICIAL! Say Woof! by Frankz Paw Printz has won 2nd Place in the QC Times Reader's Choice Awards for 2013. 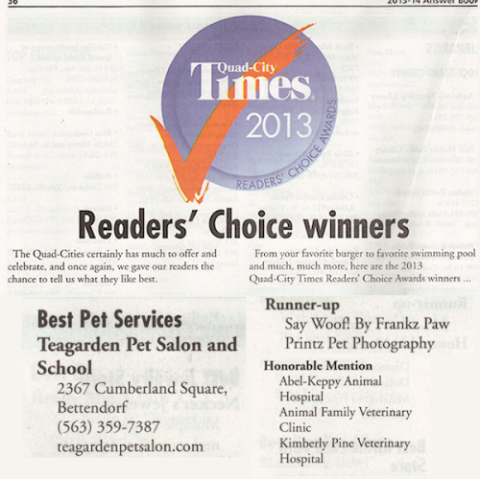 I am totally happy with 2nd Place as there were 59 entries in the BEST PET SERVICES group which were made up of Grooming Salons, Veterinarians, Pet Stores, Dog Bakeries, Boarding Kennels and Doggy Waste Services. But the BEST is that the Grooming Salon where I greet you every Monday through Friday Teagarden Pet Salon and School WON 1st PLACE! This is also where I have a photography studio at. So, after you have your pet groomed at Teagarden, I am able to take your pet's portrait. SO, together, we took the top two positions in this Quad City favorites contest!

Pick up today's Sunday QC Times and get your copy of The Answer Book - Your resource guide to the Quad-Cities. In there you will not only see our achievements, but you be able to have a list of all the Quad City Reader's Choice Winners for 2013.

You'll also find our ads in The Answer Book: 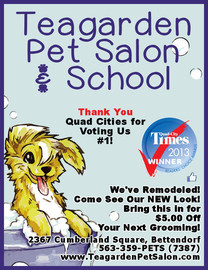 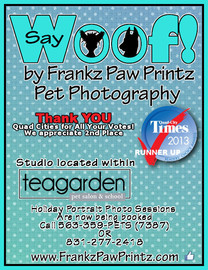 Needless to say I was thrilled when I was invited back on the Paula Sands show to once again promote on of my Dog Photography Events. I had a great time and have come to think the world of Paula Sands. The whole experiance was made to be so relaxing and fun. Easy to see why she is as popular as she is.

Paula Sands had me as a guest to talk about my upcoming Howl-O-Ween Pawty event at Happy Dog Bakery taking place Saturday October 27 and Sunday October 28th, 2012. I was able to show photographs taken last week at the Abel Keppy Animal Care Center's Open House, along with several items produced by Zazzle using my Halloween photographs and Graphic Artwork.

The backdrop I'm using is fantastic and as you can see in the pictures, it made the portraits really fun.

I had the pleasure today of being a guest on the Paula Sands LIVE show. I was invited to come on and promote the upcoming event Christmas in August that is being hosted by Teagarden Pet Salon. This is a two day event that is open to the public to bring their pets and have them photographed for their Christmas Portraits.

Beginning in August I have been at Teagarden Salon photographing pets right after their grooming has been completed. Portraits are then available to Teagarden's clients. 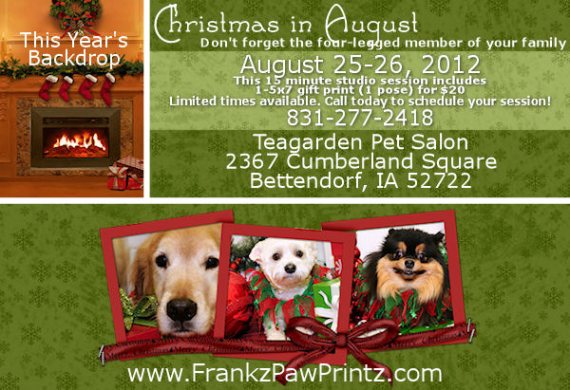 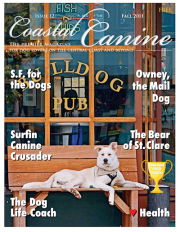 The area where we live, Carmel by the Sea, California is known to be one of the most dog friendly areas in the United States. With most hotels and restaurants accepting our canine travel companions, you'll find that most visitors are accompanied by their pet. It's not unusual to see dogs strolling through Macy's, let alone in all other business establishments. We even have a beach that stretches for miles that is off-leash. This is where I spend a lot of my time photographing the many dogs that visit and the many that live there all year long. 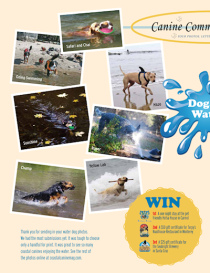 We are also lucky enough to have a wonderful FREE magazine called Coastal Canine that is published four times a year With it's many dog related articles, you'll find local dog events, health and wellness articles along with many other special interest articles. You can click on any of the magazine photos to be able to download this FREE publication.

One of my photographs "Yellow Lab" made it into the lastest Fall 2011 issue on page 6. This I was thrilled to see.

As you know, all my photographs and artwork are available on various products at Zazzle, CafePress, Fine Art America, Greeting Card Universe, Snapfish Australia and Snapfish New Zealand. So, I was thrilled to see that right after this issue came out, I sold a pair of Keds show with this Yellow Lab image to someone in Washington DC. 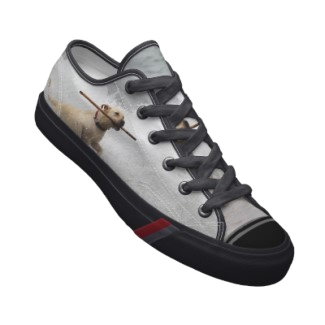 This image is also on many other products...below are just a few. 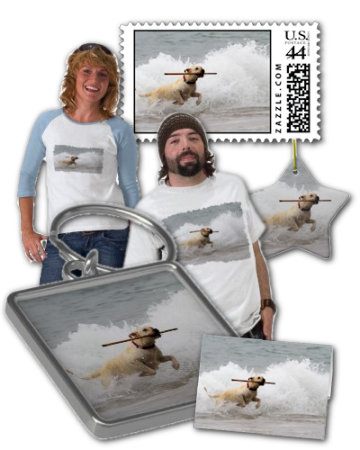 My Beach Dogs Calendar also has this image along with many of the other Beach Dogs I have photographed.

For a while it looked like the rain was going to squash the Doggie Easter Egg Hunt, but at the last minute the rain stopped and opened up a beautiful sunny sky. A little chilly and a little windy, but that was not paid any notice once the hunt began.

We had a great turn out for the Humane Society of Scott County event and I was able to take a boatload of photographs. 10% of our sales will be donated to HSSC. If you click over to my Photo Gallery, you can view the entire photoshoot. Here are a few to give you a taste....

Thanks to Kim Kline Smith for her help by handling the on-site printing of the photographs.

Just a little while ago, Kim alerted me to the fact that QC Online did a write up of the event and that we were written about in it.

There were treats to be had, and the treat hunters meant business.

"Go ahead and line up!" said Pam Arndt, executive director of the Humane Society of Scott County as she stood on a small step ladder among scores of dogs and more than 200 people Saturday afternoon at Davenport's Lindsay Park.

"Large dogs, small dogs," she said. With each category of canine she motioned with her hands in another direction.

"So the big ones won't trample the little ones," Ms. Arndt had explained a few minutes before.

A wave of people and dogs rolled forward into the flat grassy field, looking for the egg-shaped dog biscuits that were the prize of the Humane Society's annual Doggie Easter Egg Hunt.

There were big dogs and little dogs. There were shaggy ones and short-haired. They nosed forward through the fresh spring grass, gobbling the cookies they found.

Many of the human participants were dragged along behind their eager pets. Others managed to keep control, guiding their animals to the treats.

"C'mon! Keep looking," one owner said. "Are you hunting?"

"Find the treats," said another.

Some people gathered armfuls of the treats so their pets could have them later, and there were plenty to go around.

Ms. Arndt said there were hundreds scattered through the grass.

"They are from Happy Dog Bakery," she said. "They made them especially for today."

The event began at 1 p.m. Within five or six minutes, there was not a treat to be seen in the grass.

Off in a corner, dog portraits were being taken. The animals were dressed up with bunny ears and pale yellow bandanas

The owners and photographer Renae Frankz tried valiantly to hold short canine attention spans long enough to get off a few good shots.

They appeared mostly successful in getting doggy eyes and ears pointed in the right direction long enough to get a picture.

Kristin Harrington was out with Fritz, one of her adopted greyhounds. She has been to dog Easter egg hunts before, but Saturday was her first time at the Scott County Humane Society's event.

"Fun. Lots of fun," she said of the hunt. "Greyhounds are my thing, but I like seeing other breeds, too."

She and Fritz had gotten about ten cookies, though the lanky dog had not eaten any at the park. 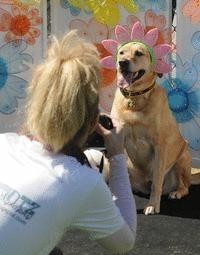 From the beginning, I have grown this business through word-of-mouth referrals. I would  sincerely appreciate you downloading my Say Woof! Portfolio App, and using the built-in share button to share this photo app with your friends and family.

Please connect you Smartphone to Wi-Fi the first time you load it. Once it is fully downloaded, you will be able to open your app while offline. Open the email on your mobile device, and click on this link:

If you open the link for the first time, it works best if you do this while you have a Wi-Fi connection (because it’s faster to download the photos).

iPhone / iPad / iPod: Just follow the instructions once the app comes up.

Android phone and tablets:
1. Add the page with photos to your Bookmarks
2. Open the list of Bookmarks
3. Tap and hold the Bookmark with the photos
4. Select "Add to Home Screen"

And now you just click on the icon to view your favorite photos (and to show to others)! Once you've installed and viewed the entire album, your pictures will be viewable anytime with or without network connection.

To book your session now, give us a call or fill out our online form.

We are located at:

On location throughout Carmel, Monterey, and Pebble Beach

We offer a wide range of photography services at affordable rates. Find the photography package that's right for your special moment!